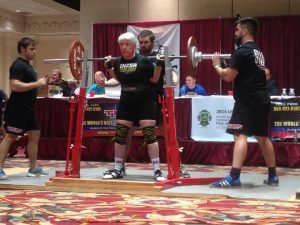 When did you begin Powerlifting
My first meet was in November 1994 at the Marine Corps Air Station in Beaufort, SC.  There were 5 women lifting, 4 female Marines and me.  I placed 5th.  I was absolutely petrified, I think if I had not been wearing an erector shirt, my heart would have come out of my chest.

What is your athletic background?
Other than playing on the girls’ basketball team in high school, none.

How did you get into powerlifting?
I had smoked for 37 years and was up to 3 packs a day, I decided to quit and then started eating a lot.  I gained a lot of weight.  So I started walking, I walked off 65 pounds in a year. Then I decided to join a gym to “tone”.  I started out working just on machines and then graduated to free weights.  Some powerlifters joined the gym and they watched me deadlift and said you have a strong back, you should be a powerlifter.

Highlights/Memorable Events
Probably the most exciting was being flown to New York City and appearing on the Montel Williams’ show.  Even after talking to them many times on the phone and being videoed at the Charleston Air Force Base., I didn’t believe it, so on the way to the airport, I told my husband, don’t leave until I get checked in. Second, would be my first world meet which was the 1995 WDFPF Masters and Junior/Sub-junior World Championship in Horsham, England. Highlights have always been the people and places, not the numbers.

Who influenced you in powerlifting
It was the guys that got me into powerlifting, Benny Tagavan, Rick Carswell, Carl Richie and Tony Thomas,  that was the influence.   After that, it was not so much about influence but about support.  And that would be family.  I have been to many “show and tell” classes by my grandkids.  Their teachers didn’t believe that their grandmother did what I do, so they would take pictures and trophies to prove what they said.  My daughter, Theresa has “shirted” me in the gym and at many meets and being there for me.  When I couldn’t get referees for the meet, she took the test and refereed for me.  My son, Jimmy who came to meets and when he was so sick, came and cheered me on, insisting I go to a world meet and said he would still be here when I got back.  He insisted that everyone watch the Montel Williams show I appeared in and if you were close, you had to watch the video.  And for my other son, JR, for being proud of his old mom.

As your name goes down in history, what would you like to be most remembered for?
For the women who have seen me compete and said to themselves  “If she can do it, so can I.”

What words of wisdom would you like to pass down to the future female powerlifters?
As my dad use to tell us, “Never say can’t, cause can’t never done a damn thing. 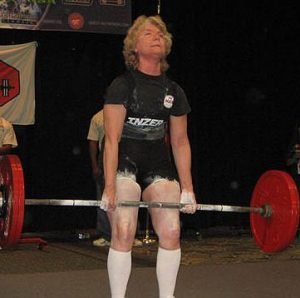 Happy New Year 2021 to everyone! Be safe as you

@rpstrength is hosting their biggest Transformatio

We are proud to announce that after much planning

It is the mission of USA Powerlifting to provide powerlifting competition of uniform high quality which is drug tested and available to all athletes who meet the criteria for membership throughout the United States.