Robert Crawford is honored to share the USAPL Founders Hall of Fame Award with those who created USA Powerlifting drug-free powerlifting in the United States. 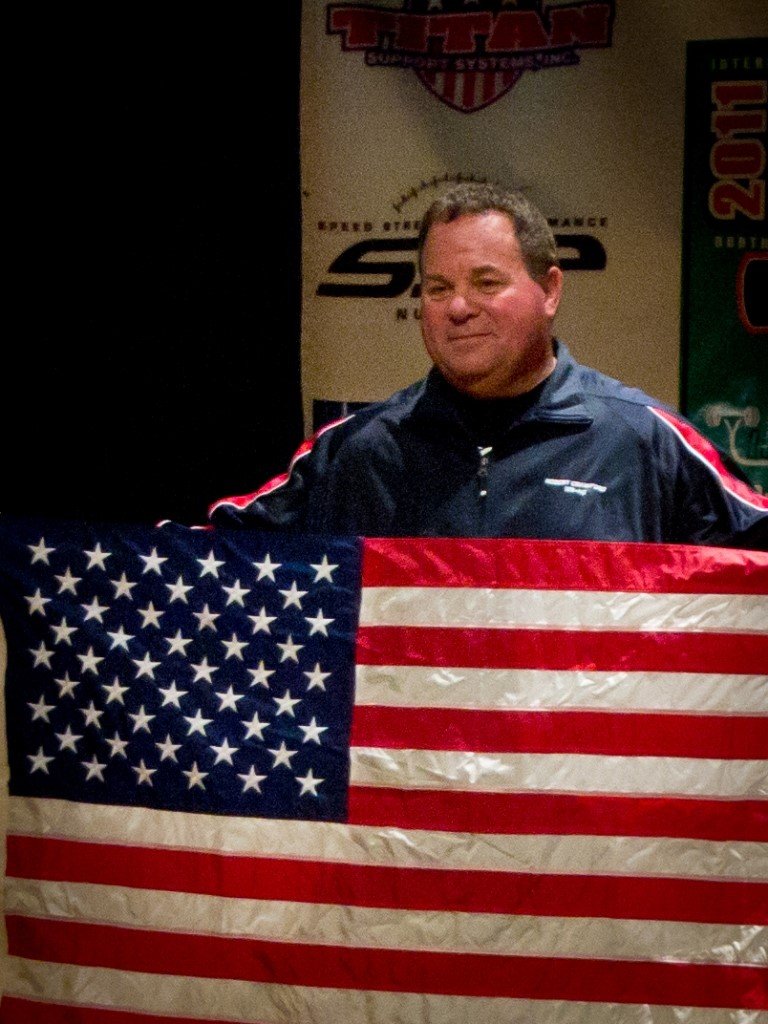 Robert Crawford during an awards ceremony in Miami, October 8, 2011.

With others, Robert Crawford co-founded the ADFPA in 1981 with Mobile, Alabama Attorney Vince Kilbourn, and Brother Bennett.

As Crawford tells history:  I conceived the idea for drug-free lifting.   By the late 1970’s I was tired of competing against juicers.   I decided to create a drug-free option and let the juicers compete in a so-called pro federation or “unlimited” federations.  While returning from a USPL meet in Augusta, Georgia, in 1980, I created the organization’s name and drafted the release from liability.  My fellow lifter, Robert Petty, from Mobile, drove for 500 miles, on a hot day, while I sat in the back seat and wrote.

Upon my return from Augusta, I met with Vince Kilbourn whom I, as a young Mobile lawyer, knew.  Vince and I both knew Brother Bennett.  I’d lifted at several USPL meets which Brother Bennett hosted at St. Stanislaus.

Brother Bennett supplied the Latin motto for the ADFPA, borrowing the motto from a banner he displayed at the St. Stanislaus high school gym.  I remember sitting with Brother Bennett in early 1981, at his desk which he kept in the middle of the gym floor, and discussing the future organization of ADFPA.

In the early 1980’s Vince was on a fitness kick.  He built a gym onto his house.  Vince hired a photographer to photograph a bodybuilding exhibition which he put on during an intermission in the nation’s first drug-tested meet.  Vince and I were co-directors at this meet which was held at the Day’s Inn in Mobile in June 1981.  I wrote polygraph questions for an F.B.I. examiner who conducted polygraph examinations.  Brother Bennett and I pooled our weight lifting equipment for this meet; Brother Bennett judged and officiated.  I lifted as a 198’er.

By mid-1981, drug-free lifting was off and running with others around the nation organizing the new federation and hosting meets.

In August 1982, Brother Bennett and I hosted Mobile’s second drug-free meet.  We used Mobile’s USMC Armory; the commanding officer assigned Marines to tote equipment.  Brother Bennett and I again pooled our equipment.  In 1982, I wanted to include women, and some thought that allowing women lifters was too radical.  For the August 1982 meet, Jan Todd and Terry Todd came over to Mobile from Austin, Texas, and Jan deadlifted around 500 lbs.  (227.5 kgs.??)  I lined up a photographer from Sports Illustrated who flew to Mobile from NYC.  He photographed the meet and Sports Illustrated ran a full-page story about Jan Todd’s big deadlift.  George Hummel, a co-founder from New England, lifted in this meet, too.  Hummel made a lift, which stands today in the top 50 on PWL USA’s list.  (I don’t recall which of the three lifts this was.)

After the initial incorporation, others, of course, moved the ADFPA forward.   For example, George Hummel ran ADFPA’s first nationals.  Kudos to him.  Hummel was also a great drug-free lifter.

An early contributor to ADFPA was Attorney Lucian Gillis.  In the early 1980s, Lucian lived in Mobile, Alabama, and practiced in Mobile.  Lucian competed in ADFPA and sat as a referee.

Ten days after I finished co-directing the 1982 ADFPA meet in Mobile with Brother Bennett, I moved across the country.  I moved from Mobile to Milwaukee, Wisconsin, and established my legal career.  After August 1982, aside from competing and hosting one ADFPA meet in Milwaukee, I had no involvement in ADFPA administration.  I did, however, update my release from liability to take into account new legal precedents.  The release is the best protection available to meet directors, loaders, and spotters.  By the mid-1980s, however, Pat Malone from Purdue complained the release was too long and that he couldn’t conveniently include it in an entry.  Willy-nilly, language was deleted.  This undercut the efficacy of the release and was unfortunate.

I’ve trained since 1963, barely missing a workout.  I’ve competed since 1970.  I’ve lifted on USAPL World Bench Press Teams, World Powerlifting Teams, and NAPF Teams.  I enjoy international competition and hope to do more.  I’m 70-years-old, but I feel that age is only a number.  Drug-free lifting is the fountain of youth.

In 2011 I was honored to share the Brother Bennett award with David Ricks, a world champion and world record holder, an Annapolis graduate, and a naval officer.

Thank you to the executive committee for these honors.  God bless Brother Bennett for his dedicated leadership of ADFPA and USAPL.