Anthony “Tony” Harris competed in his very first meet in 1982 in high school. He was 165lb with a 500-sq 350-BP and 425-deadlift, totaling 1275. This was raw by today’s standards, lifting only in a belt and no support gear. Now, forward eight years later, Tony started powerlifting 30 years ago [1990] as a 198lb lifter. He competed in his first national meet in 1992 taking second place to the defending champion Sylvester Anderson.

After exiting active duty Army and joining the Army Reserve, he was able to focus more on his training and looked forward to meeting and competing with some of the same lifters he’d been reading about in the magazine Powerlifting USA. Lifters like Gene Bell, Ed Coan, Steve Goggins, and a bunch of others. In 1996 he won his first USPF open national and competed at his first IPF World Championship placing 5th and I believe that was the last year that the men team took 1st place. In 1997 the following year he placed 3rd at USPF Nationals with Gene Bell taking 1st and Jeff Douglas taking 2nd but he was able to compete at the 1997 IPF World Championship due to Gene dropping back to 198 and Jeff was hurt. He started the meet with good squat but then bombed on the benchpress. During this time you were not allowed to continue after bombing out. This was also the year the USPF was voted out of the IPF and USAPL came in switching its name from ADFPA.

In 2001, he returned to the national platform moving up to 242 after recovering from the back injury (herniated disc at L4, L5, and S1). His medical doctor told him that his powerlifting career was over but he found a chiropractor, Dr. Michael Masters. He told Tony if I can’t fix you, you don’t pay me. With that being said he got to work and started treating Tony immediately. Ten weeks later and twelve weeks out from nationals, Tony started to squat again after being laid up for two months and unable to train for another three months. The will to feel the heavy weight returned and the body welcomed the feeling and with the advice of his chiropractor, he told Tony to move up a weight class and not to drop weight anymore. He competed at nationals edging out Kevin Stewart for the 242 USAPL national title and came in 6th place at the 2001 IPF World Championship.

Tony won USAPL nationals at 242 in 2002, 2003, 2004, 2005 and came in 2nd in 2006 losing to Nick Tyluki after tearing his left quad on his second attempt squat 815. So no open IPF worlds but he did win Masters USAPL nationals and IPF worlds. 2007 was a stacked class and one of the most exciting up until this point. Nick Tyluki defending champion, Michael Masterean moving up from 220 to 242, and Jeff Douglas. It was a battle until the very last deadlift deciding the winner. A teeth biter with Tony needing his last deadlift for the win and he pulled it like it was an opener. That was also a meet in which a lot of people thought Tony would not win as he’s gotten older and can’t keep up with the young guns. Well, again he proved them wrong and continues to get stronger as he ages.

After the 2007 USAPL nationals, he focused on lifting in the master nationals in 2008, 2009 and winning the IPF worlds also. 2010 he missed due to his wife’s health and took the year off. He returned in 2011 and at this time the IPF voted to realign the weight classes.

Tony usually walks around weighing about 250-255. But the new weight classes had him sitting in between 231 and 264. He attempted to drop to 231 for 2011 master nationals but hit a wall and weight drop stalled at 235. So he decided just to lift at 264 and didn’t have a good day going 4/8 and losing to Jeff Douglas. After that loss he got the invite to compete in Australia at the Australian Powerlifting, Benchpress and Pacific International meet where he went to redeem himself for the poor performance at master nationals. And redeem himself he did. Squatted a massive 909 IPF master world record. He shared the platform with teammate Brad Gillingham and Nathan Baxter, Stephen Pritchard (Australia), and Sonia Maneana (NZ).

Later that year Tony’s unit got called up and he was deployed to the middle east for the next twelve months but continued to train when he was out on missions. He competed in some of the contests on base just to support the soldiers he was there with, helping train them. After returning back to the US and demobilizing, he had some issues to deal with and spent most of 2013 getting his body healthy and looking for his return to the platform.

2014 Tony returned to the platform at the Arnold Sports Festival and it was a good meet to shake off the rust of not competing for a while. A few months later he competed at the North American Regionals in the Virgin Islands and a week later competed at Raw nationals in Aurora, Colorado.

In 2015 Tony found out he had prostate cancer. And after having surgery, sitting at home recovering, and not able to lift anything for two months he followed up with his doctor and got the go-ahead to start lifting again and the last day before the entry deadline, Tony submitted his entry for the 2015 Raw nationals. He told his training partners, Al Fritz, and Austin Keanu, and they asked him was he sure about it and in Tony fashion, he told them “I’m good, the doctor says it’s okay and I feel great.” So he competed and came in first place master 2 and sixth in the open class.

2016 Tony won the IPF Classic Championship M2 class and later in the year won the USAPL Open Taw nationals as an M2, oldest lifter in the class.

2017 Tony competed at the Arnold Sports Festival in the Rouge Invitational on the main stage. He squatted 834 for a new Open, M1, and M2 IPF World record at 52 years of age. Again Tonys unit is called up to deploy to the middle east and he has to give up his spot to compete at the IPF classic world Championship. A few months later, Dennis Cornelius returns and smashes the record, and puts it at 851. Tony didn’t compete at the 2017 Raw Nationals due to being deployed.

In 2018 after getting back to the USA Tony competed in the deadlift challenge at the Arnold Sports Festival. Not his best meet, but he enjoyed being on the platform and talking with all the lifters. He competed in the 2018 Raw Nationals and came in third place but unknowingly, was lifting a herniated disc at L3. Now taking time to get healed up and healthy again he gets an email to compete in Nauru in January 2019. He accepts what happened and competes at the Nauruan Powerlifting Championship Challenge. The visiting lifters were welcomed by the island people and really taken care of. Among the names there competing were Kimberly Walford (VI), Steve Ringoot(Bel) Erik Willsi (Can), Joshua Greenfield (UK) Jaisyn Mike (USA) Leslie Evangelista (HK), and the home hometown heroes Jezza Uepa and Harris Irving.

2019 started off good and next up was the IPF Classic World Championship in Sweden. Tony was almost not allowed to compete due to a new rule. It went back and forth and finally left it in the hands of the coaches. He was able to lift, the warm-up was fast and furious. He won but didn’t have a good day at all. He took it and awaited his next meet, the 2019 USAPL Raw Nationals. The training was going good and about six weeks out he pulled his right hamstring. Not one of his best performances but he’s back at the drawing board training and still working hard to get better. 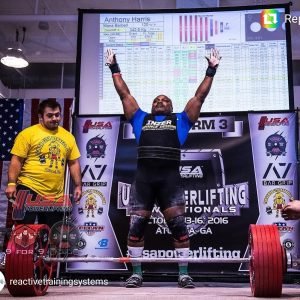 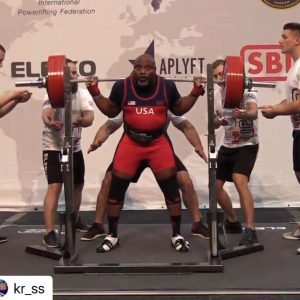